The governance and management of Componenta are based on Finnish legislation, the company's Articles of Association, the rules of the Helsinki stock exchange and the regulations and instructions issued by the Finnish Financial Supervisory Authority. Governance and management are guided by Componenta’s values, operating principles and policies as well as responsible operating methods. As of 1 January 2016, Componenta complies with Finnish Corporate Governance Code 2015, which is available online at www.cgfinland.fi. 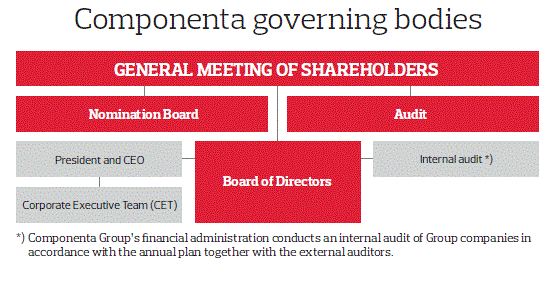 This site uses cookies to ensure the best performance and user experience. We may also use cookies for site analytics purposes. By clicking "Accept all" you agree to the use of cookies. For more information, see our Privacy Statement.